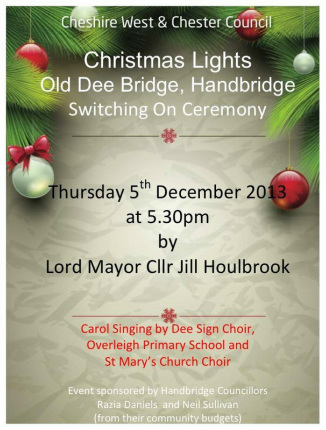 Our park has become a Queen Elizabeth II (QEII) Field.  I say our park. Edgar’s Field is a public park but it feels like our front garden.

It’s the place that offers sanctuary on dark days, tantalising brushes with nature as the seasons change and endless hours of playground fun for the girls as they clamber over the pirate ship and soar skywards on the swings.  It feels like home.

Last week a shiny, silver plaque was attached to the railings outside.  The park has been granted QEII Field status, an award from the Fields In Trust organisation, following nomination by the local community.  It basically means the park has greater protection. If you want to build on it now, you now have to answer to her Maj.

We take our parks for granted. But we shouldn’t.  Parks form part of the fabric of life that makes us feel secure.  I still remember the park I played in as a child, the rocking motion of the horse-shaped seesaw.  Maya and Olivia may not realise it now but the innocent moments, playing in our front-garden park, may prove to be some of their most comforting childhood memories.

“They will never know more freedom than reaching for the sky on the swings on a crisp autumn morning.”

We’re lucky. Our park’s future looks safe and, buoyed by its new-found status, the local community group is now aiming higher.  It is looking to establish a lookout on the park’s Weathervane Hill to take in the twin-bridge views of the Grosvenor and Old Dee bridges, plus to soak up the nature thriving amongst the lime trees.

Love your park. We do. 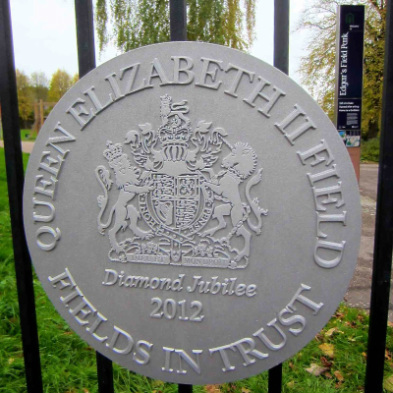 Edgar’s Field park has received its Queen Elizabeth II (QEII) Field plaque from Fields in Trust. This is now proudly displayed on the railings close to the entrance to the park.

It was one of nine outdoor recreational spaces nominated by their local communities, put forward by Cheshire West and Chester Council and  selected by Fields in Trust to achieve this important status.

Fields in Trust was founded in 1925 with the mission of ensuring that everyone has access to free open space. Its main focus during 2012 was the Queen Elizabeth II Fields Challenge as a tribute to The Queen and a permanent living legacy of her Diamond Jubilee and the London Olympics and Paralympics.

With its new QEII Field status, Edgar’s Field is now one of more than 1500 outdoor areas all over the country that have been legally protected by binding agreements with Fields in Trust, safeguarding them for future generations.

Local Councillor Razia Daniels said: “This is an important safeguard for Edgar’s Field that has already served many generations of the Handbridge community well for more than 120 years and will do for years to come.”

Steve Rogers, Chair of the Friends of Edgar’s Field Park added: “Becoming a QEII Field is a significant achievement for the park and this new status should also give us access to special funds for future improvements.” 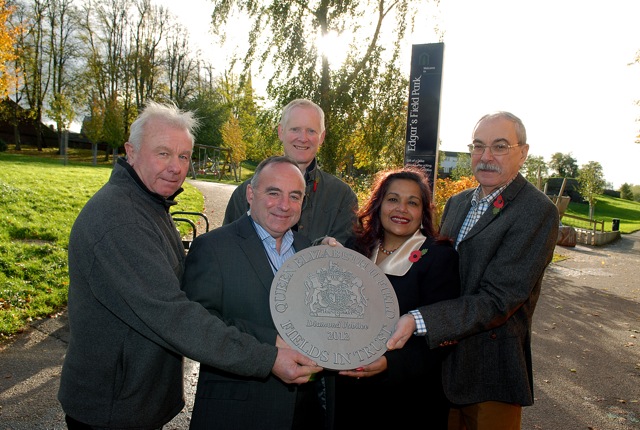 As part of our strategy to deter anti social behaviour and to generally improve the parks appearance, three volunteers cleared an overgrown area next to the path on the 'weathervane hill'.  The work took the best part of five hours.  Before and after photos reveal the improvement.

July's work meeting carried on from where we left off last month; removing the epicormic growth from the base of  trees, weeding the sandstone bank, bagging up discarded bottles and cans and digging up ivy roots.  A splendid effort by all our volunteers: Dorothy, Gerry, Graham, Ian, James, Max, Pam, Ronnie, and Steve.  Thank you all.
Next meeting: Wed 21 August 7.00pm 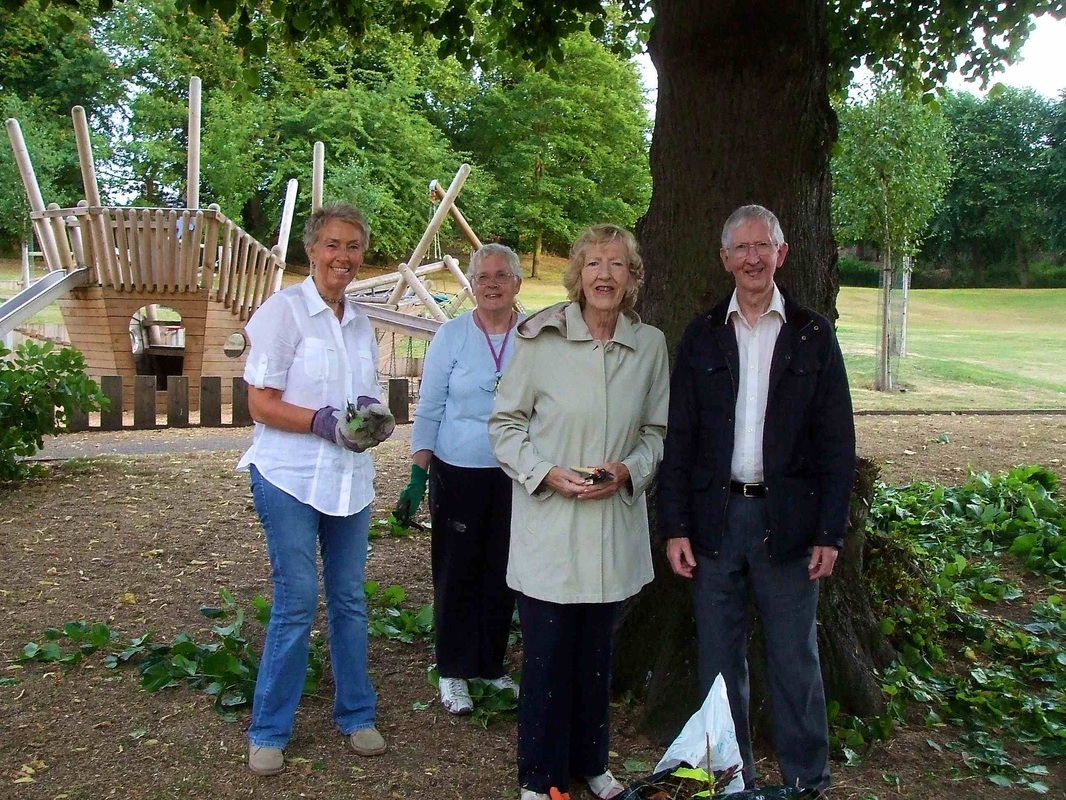 This month's work meeting coincided with very pleasant weather which always makes things more enjoyable.  Volunteers worked for several hours doing different tasks including litter picking, removing epicormic growth from the base of trees, clearing grass and weeds from stonework and cutting back ivy from hawthorns.  Many thanks to volunteers David, Gerry, Graham, Ian, James, Keir, Max, Pam, Ronnie, Steve and Tyler.
Next meeting: Wed 24 July 7.00pm
Edgar's Field has been a Dogs on Lead Park for some time now and we are pleased that most park users respect this.
Here is a link to an interesting article on the BBC's website about the nuisance caused by inconsiderate dog owners and possible remedies. 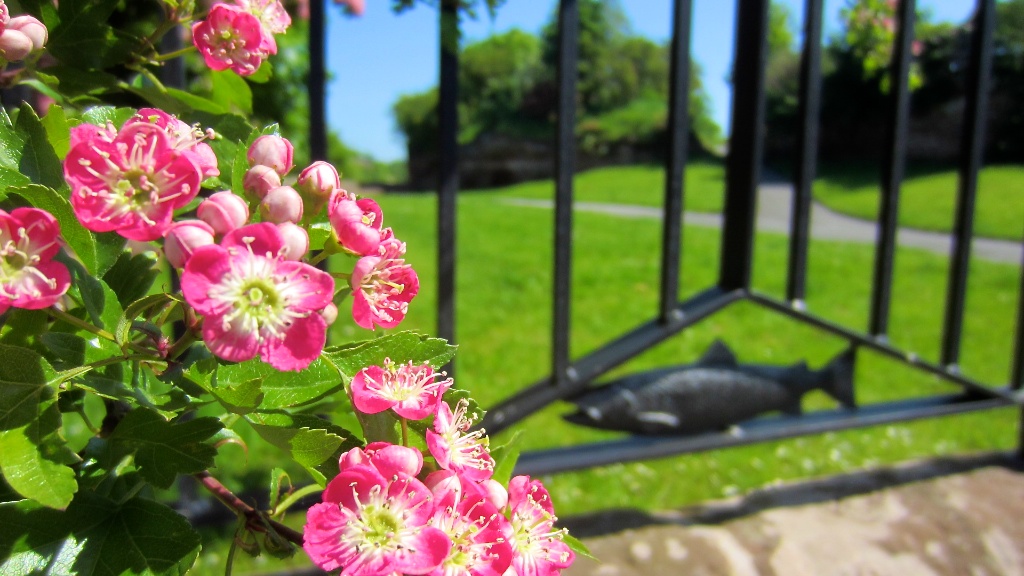 Blossom at it's best on the last day of the month. 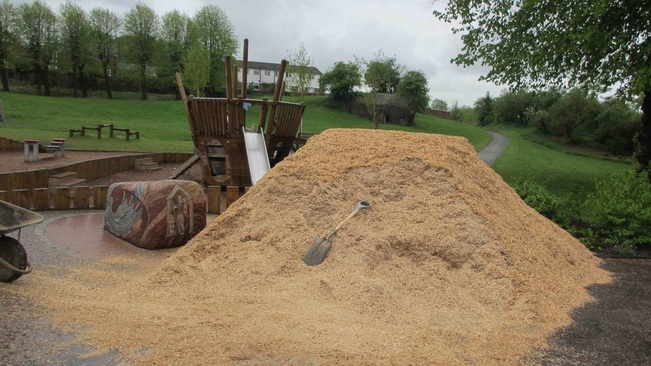 We contacted the council and asked for a new load of bark chippings
as levels were getting low. 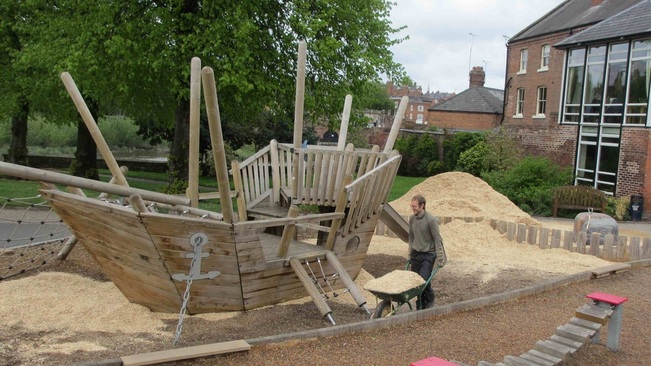 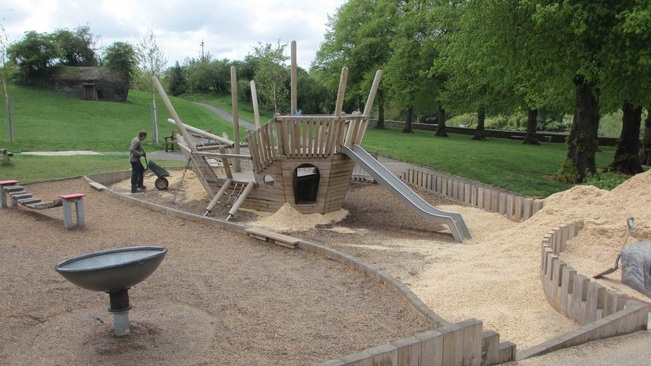 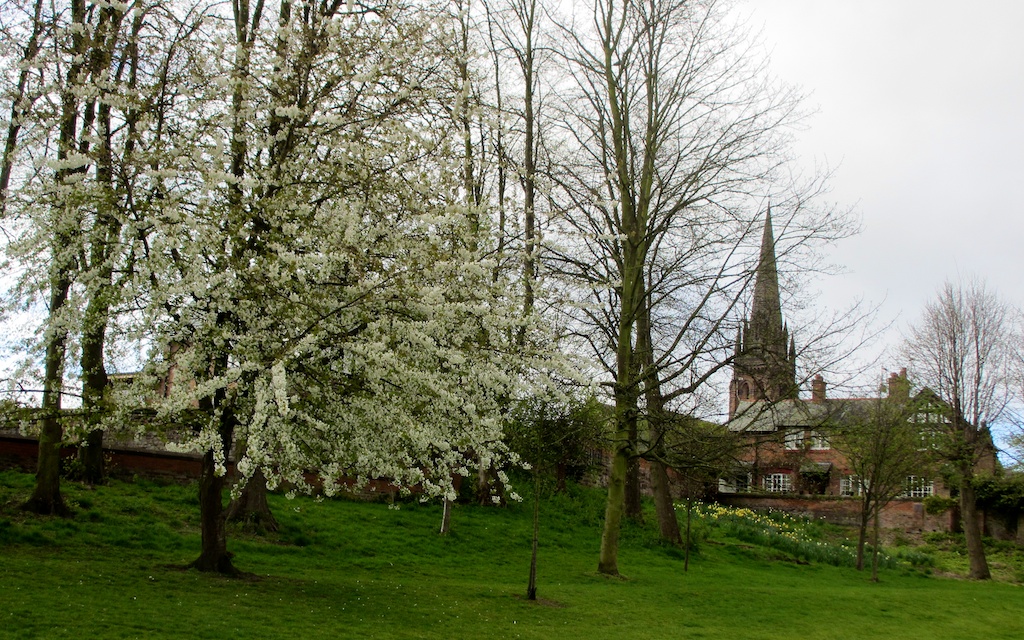 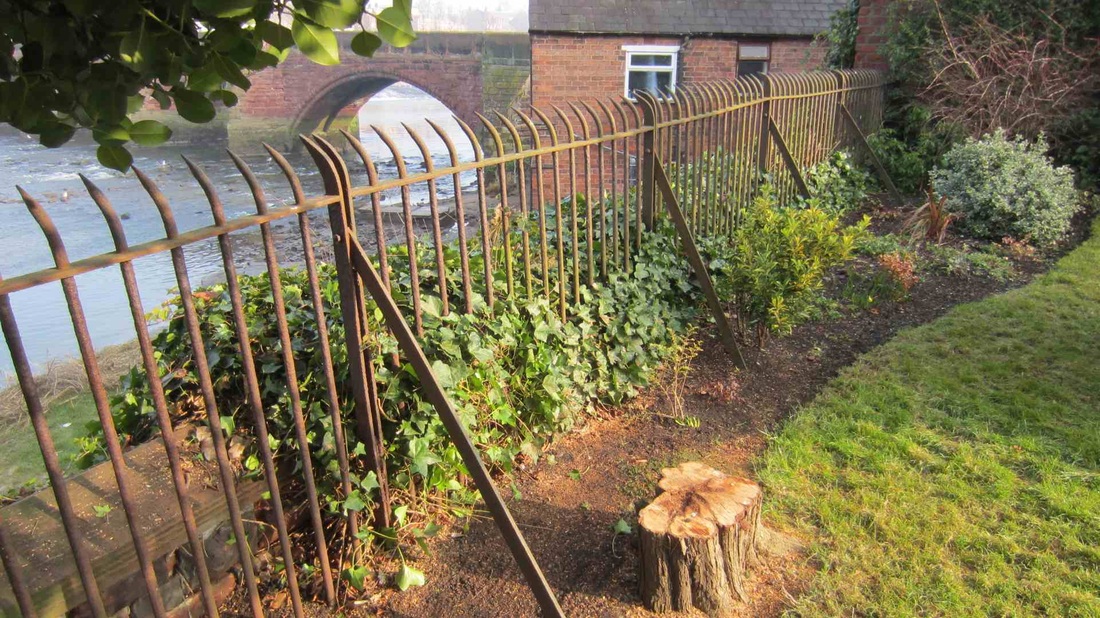 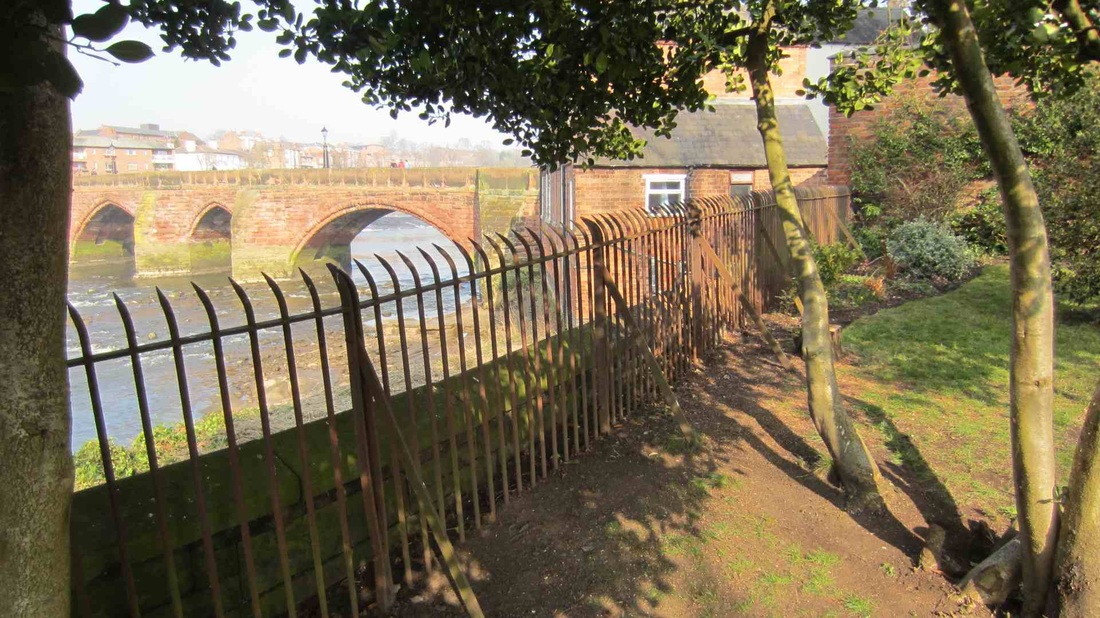 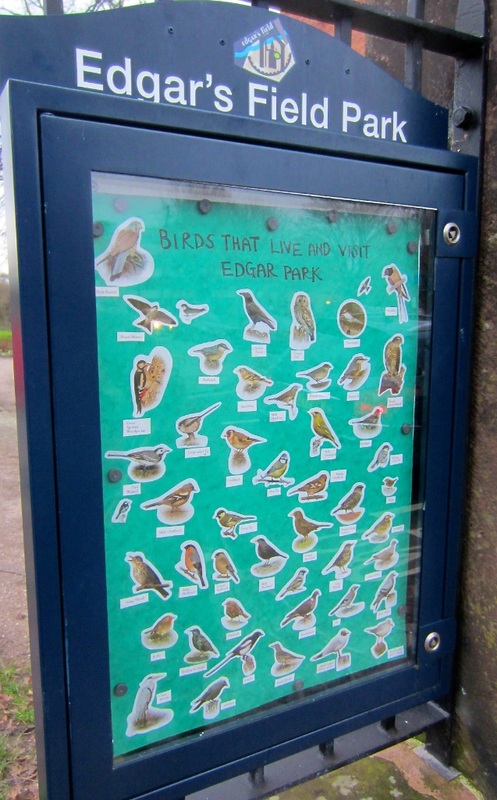 A member of  the Friends of Edgar's Field Park has produced this interesting and informative poster illustrating many of the birds that either live in, or visit the park throughout the year.  The poster is presently in the notice board at the main park entrance.
Ranger Andy James joined the Friends for a day clearing, cutting and tidying up. 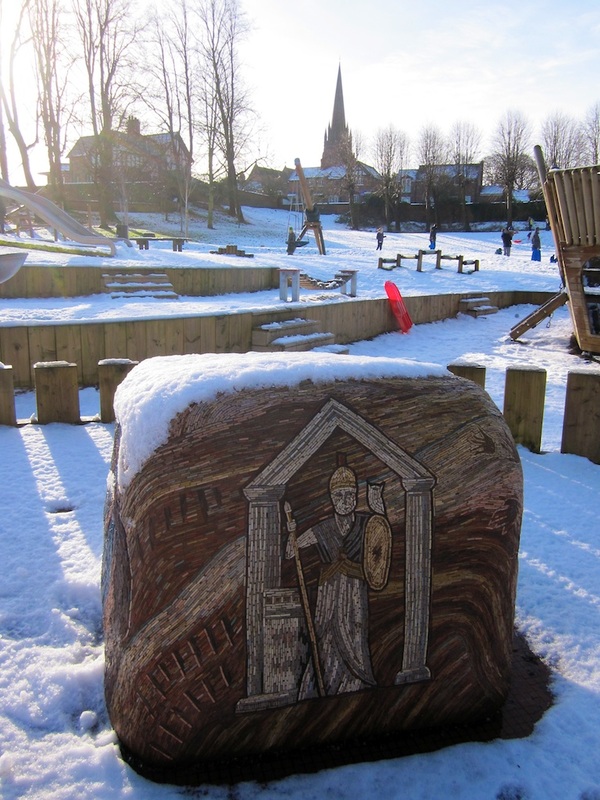 Mosaic of the Goddess Minerva under a blanket of snow.